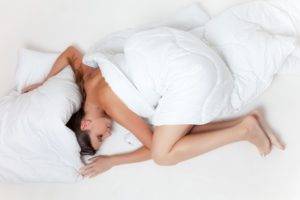 What Is Restless Legs Syndrome?

Restless legs syndrome (RLS) is a sleep disorder in which a person experiences unpleasant sensations in the legs described as creeping, crawling, tingling, pulling, or generalized pain. These sensations usually occur in the calf area but may be felt anywhere from the thigh to the ankle. One or both legs may be affected; for some people, the sensations are also felt in the arms. These sensations occur when the person with RLS lies down or sits for prolonged periods of time, such as at a desk, riding in a car, or watching a movie. People with RLS describe an irresistible urge to move the legs when the sensations occur. Usually, moving the legs, walking, rubbing or massaging the legs, or doing knee bends can bring relief, at least briefly. RLS symptoms worsen during periods of relaxation and decreased activity. RLS symptoms also tend to follow a set daily cycle, with the evening and night hours being more troublesome for RLS sufferers than the morning hours. People with RLS may find it difficult to relax and fall asleep because of their strong urge to move, walk or do other activities to relieve the sensations in their legs. Persons with RLS often sleep best toward the end of the night or during the morning hours. Because of less sleep at night, people with RLS may feel sleepy during the day on an occasional or regular basis. The severity of symptoms varies from night to night and over the years as well. For some individuals, there may be periods when RLS does not cause problems, but the symptoms usually return. Other people may experience severe symptoms daily. Many people with RLS also have a related sleep disorder called periodic limb movements in sleep (PLMS). Involuntary jerking and bending leg movements during sleep that typically occur every 10 to 60 seconds characterizes PLMS. Some people may experience hundreds of such movements per night, which can wake them and their sleeping partners, disturbing their sleep. People who have RLS and PLMS have trouble both falling asleep and staying asleep and may experience extreme sleepiness during the day. As a result of problems both in sleeping and while awake, people with RLS may have difficulties with their job, social life, and recreational activities.

Although the cause is unknown in most cases, certain factors may be associated with RLS:

RLS occurs in both sexes. Symptoms can begin any time, but are usually more common and more severe among older people. Young people who experience symptoms of RLS are sometimes thought to have “growing pains” or may be considered “hyperactive” because they cannot easily sit still in school.

How Is It Diagnosed?

There is no laboratory test that can make a diagnosis of RLS and, when someone with RLS goes to see a doctor, there is usually nothing abnormal the doctor can see or detect on examination. Diagnosis therefore depends on what a person describes to the doctor. The history usually includes a description of the typical leg sensations that lead to an urge to move the legs or walk. These sensations are noted to worsen when the legs are at rest, for example, when sitting or lying down and during the evening and night. The person with RLS may complain about trouble sleeping or daytime sleepiness. In some cases, the bed partner will complain about the person’s leg movements and jerking during the night.

To help make a diagnosis, the doctor may ask about all current and past medical problems, family history, and current medications. A complete physical and neurological exam may help identify other conditions that may be associated with RLS, such as nerve damage (neuropathy or a pinched nerve) or abnormalities in the blood vessels. Basic laboratory tests may be done to assess general health and to rule out anemia. Further studies depend on initial findings. In some cases, a doctor may suggest an overnight sleep study to determine whether PLMS or other sleep problems are present. In most people with RLS, no new medical problem will be discovered during the physical exam or on any tests, except the sleep study, which will detect PLMS if present.

How Is It Treated?

In mild cases of RLS, some people find that activities such as taking a hot bath, massaging the legs, using a heating pad or ice pack, exercising, and eliminating caffeine help alleviate symptoms. In more severe cases medications are prescribed to control symptoms. Unfortunately, no one drug is effective for everyone with RLS. Individuals respond differently to medications based on the severity of symptoms, other medical conditions, and other medications being taken. A medication that is initially found to be effective may lose its effectiveness with nightly use; thus, it may be necessary to alternate between different categories of medication in order to keep symptoms under control.

A non-drug approach called transcutaneous electric nerve stimulation may improve symptoms in some RLS sufferers who also have PLMS. The electrical stimulation is applied to an area of the legs or feet, usually before bedtime, for 15 to 30 minutes. This approach has been shown to be helpful in reducing night time leg jerking.

Due to recent advances, doctors today have a variety of means for treating RLS. However, no perfect treatment exists and there is much more to be learned about the treatments that currently seem to be successful.